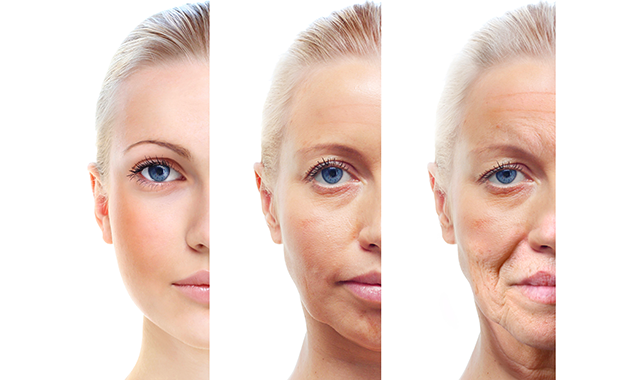 Most people do not believe they’ll look much different when they get older, but it is a fact of life that your face changes with age. For anyone looking in the mirror on a daily basis, the first signs of aging are on the surface: darker under eye circles that seem somehow larger than the last time, a pair of lines between your eyebrows, an odd collection of extra skin and fat at the bottom of your jaw.

But those outward changes are the result of deeper structural changes in your bones, muscle, and fat that make a big difference in what you like like when you age. Here, we’ve outlined what really happens as your face ages .

The four major areas of structural change are bone, muscle, fat, and finally, skin. But before we dive into how your face changes with age, here are the basics of face structure: your outer skin is packed from the inside with the hypodermis, which is where all your fat is found. The hypodermis is what connects to the web of your facial muscles, which in turn link to your bone structure. We’ll explore these elements from the inside out, starting with the bone.

Despite their rigidity, bones don’t stay the same as we age—they lose mass, migrate, and cause major changes in our appearance. This outline from Live Science on how our bones age explains how the eye sockets, nose, and jaw are major migration points. “The facial skeleton experiences morphologic change, and an overall decrease in volume, with increasing age,” researchers wrote in the Journal of the American Society of Plastic Surgeons.

According to dermatology experts, “Bone loss in the face can lead to narrowing of the temples and retraction of the jawline and mouth. The nose starts to descend.”

They also explain what happens when bones migrate and lose density. “The orbital rim (aka eye socket) widens, particularly along the outer inferior edges, giving your eyes a more sunken appearance with more prominent fat pads resulting in a tired look.” That retraction of the jawline unveils “jowls and an unstructured neck”.

The kicker? Most of these changes happen much earlier in women—between young and middle age—and much later in men—between middle and old age.

Solutions: There are no skeletal approaches to anti-aging, but there are preventive procedures to avoid sagging. Keeping the skin taut is the best approach here. You can achieve more youthful and elastic skin by drinking the daily recommended amount of water, ingesting the daily amount of vitamins, and topically applying vitamins, antioxidants, and sunscreen.

That underlying structure of facial muscles mentioned above is called the superficial muscular aponeurotic system (SMAS), and it sits between bone and fat. When bones give way, the muscles follow.

“The facial muscles and fat pads decrease in volume, while the casing holding them together (the SMAS) loses its elasticity, culminating in a true domino effect.”

Solutions: Before this loss of volume takes place, your muscles have the chance to work up lines from repetitive motions. “Muscular activity can result in “etched-in” lines due to repeated motion. This is why it is important to take preventative measures to keep your skin taut so that it does not settle into the creases and cause wrinkles.

As babies, our faces are round and full of pudgy, subcutaneous pockets of fat. As this Harvard Health article describes, that fat diminishes and rearranges itself slowly but surely, finding new pockets to inhabit as we age. Usually, those pockets aren’t high on our cheekbones or perfectly arranged to balance our eyebrows and eyes. They drift downward, clumping around the chin, jaw, and neck.

This movement happens in your forties, in particular, and continues steadily as the years pass. Dr. Heidi Waldorf, Director of Laser and Cosmetic Dermatology at The Mount Sinai Medical Center in New York City, told Women’s Health, “Although there are variations due to genetics, in general we lose the deep fat pads in the mid-face and those of the temples and the front of the ears first. Then we lose [fat] around the mouth and chin and along the jawline.”

The result? It looks like your skin is falling and wrinkling (which it is) but the underlying cause is the deflation of fat.

Following the path of sagging skin, the perky button nose of your youth starts to turn downward. According to Dr. Waldorf, “This is partly due to lack of soft tissue support and also a result of the upper lip retracting downward and the nose following. The top of the nose at the bridge often sinks, causing a horizontal wrinkle, in addition to the vertical lines between the brows.”

Solutions: In this case, wrinkles are the primary target (rather than overall sagging or muscle, though of course, as we’re learning, everything’s related). Again, it is important to apply a topical remedy of anti-wrinkle ingredients to prevent sagging.

According to new research, there might be more at play when your face changes with age: “There is an interesting theory recently being floated around that what really happens in aging is that the skin starts to expand and lose its elasticity, rather than the support being lost.”

It could be that your skin is just losing elasticity and stretching—simple as that—rather than this four-stage aging process. What we’ve learned here is that prevention to the loss of elasticity in the skin is key, so it is important to begin preventative measures to keep the skin tight and firm. Solscense is a clinically proven anti-aging cream that specializes in keeping skin taut and elastic. In addition, it prevents sun damage which is 90% of the reason for premature sags and wrinkles.